posted 03-22-21 06:07 PM EDT (US)
DevEd can't mod various things: - Race relations, ATK/DAM/range/RoF of spells and abilities, gold upkeep formula, installation time, city upgrade cost, and so on.
For 20 years only Warlock went beyond DevEd's capabilities, just a little to limit hero DEF, and he didn't tell anyone how.
But last year And G revealed his AoW+ mod, and when asked how he did certain things, he revealed his methods!

Then you open the "AoWEpack.dpl" file in PE Explorer, using the "Disassembler" option in the Tools menu. You should be looking at code now, as in the 1st screenshot of this post.
Search for the things you're interested in modding using crtl-F or simply scrolling through the code. There's a lot of text annotations from the original devs, fortunately, though some things I still don't understand or haven't located (they might even be in other .dpl files).

Once you've located the part you want to change in PE Explorer, you now need to find it in HxD, because HxD lets you actually edit it, PE Explorer is just for viewing because it displays the text annotations and isn't just a vast wall of numbers.
But the ''address'', meaning the location in the file (listed numerically on the left) in PE Explorer is displayed very differently to how it's displayed in HxD.
The PE Explorer addresses have either 55701200 or 55700C00 (these numbers are both hexadecimal not decimal) added to them, according to "whether they're a code offset or a data offset" according to And G. Most are code offsets, I don't know the difference.

I have a google docs spreadsheet set up with a lot of known locations listed, with a formula which takes the PE Explorer address and churns out the two possible addresses they can be viewed and edited in HxD.
https://docs.google.com/spreadsheets/d/1um_nMQt6_hKolwhpGI6aAbf4jvio2Xr5lS5qhc0dnJs/edit#gid=1430838464
Dear reader, you will only have viewing rights, but you should be able to download a copy if you want to add to it. Let me know if you find something new!

Let's take Race Relations as an example.
Race Relations are at 558E83F0 in PE Explorer (1st attached image), and in HxD it's one of the few "data offsets" at 1E71F0 (2nd attached screenshot).
The values in the screenshots are different to TS136 because I've modded them.
4 = 90% relations or Friendly, 3 = 70% and Polite, 2 = 50% and Neutral, 1 = 30% and Wary, 0 = 10% and Hostile.
The numbers correspond to the order shown in the 3rd screenshot, although if you want to have asymmetrical relations (ie Goblins tolerate Dark Elf rule but Dark Elves don't tolerate Goblin rule) then I'm not sure which way round that is in the order. 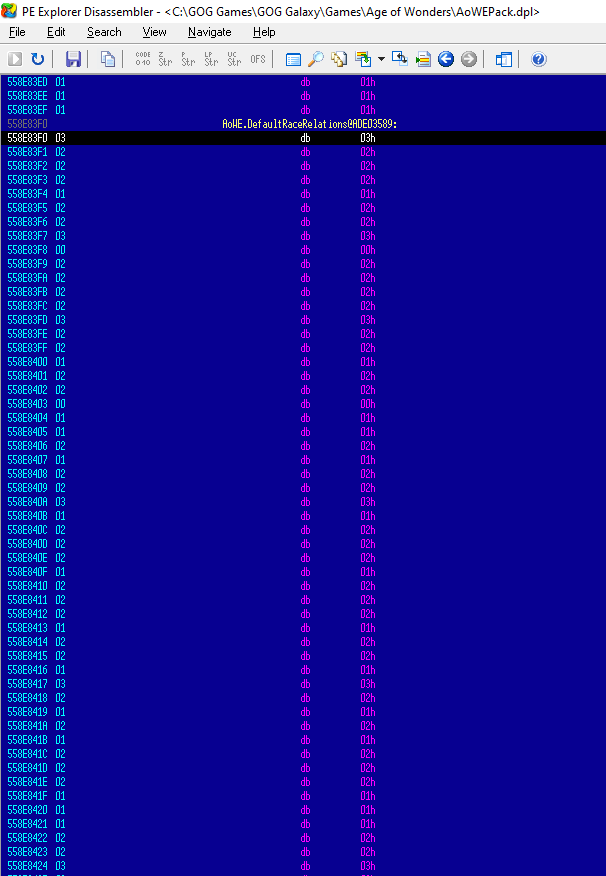 For more information, join the discord server https://discord.gg/eK3vVPazmE or email me at jianglongqua@gmail.com
You may also want to download the AoW+ mod to look at its AoWEpack.dll file, since And G - who I have only copied and explained here, I am a mere imitator - wrote some new code of his own.