Get the unofficial Patch v1.4. here!
My best AoW-Sm map: Drums of Death (This is the multiplayer version; for single player, or AI use different version)
Other proud AoW-sm maps: The Key of Kharzul, The Fight for Light, Waikiti Island, Goldrush Mountains
My proud AoW2 maps:The River Arne
Coordinator of the v1.4 and v1.5 patchteams, Seraph of AoWHeaven, PBEM Singles Champion 2008
Author
Replies: 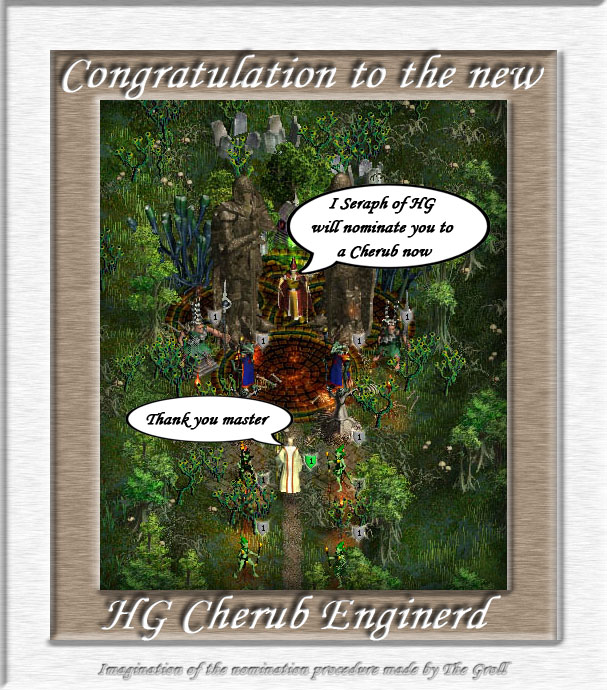 What is a Seraph and a Cherub?? Where are these expressions coming from? Is this AOW-latin or are these offical titles and if so, for what?

(in the case of the AOW-Forum) but what´s the diference (in the tasks?!) between Seraph and Cherub (God and Angel) ?!

I tried to find out something but these expressions appear nowhere :-(
Author of the following maps for AOWSM:
Version 1.4: DEMONWARS II (Transcendence & Immortalis)
Version 1.3: (also playable in 1.4) Gates to another World 1.4
><-><-><- Planning replaces coincidence by error. -><-><-><-

- Cherubs are the workers in this community doing all the work.

- Angels have more rights to change things, pages and this stuff here an kick asses of members.

- Seraphs (there is only one) are the masters of the angels. They have all the rights and doing only "God´s work" - means they don´t work with their hands or brains.

they only and kick the asses of nice people like me for example.

Behind the Seraphs of HG ther are the Halos. The ones who who earn the money for this page and they are the only who can drink the blood of anyone in this little world.

posted 01-16-09 09:51 AM EDT (US)     8 / 48
Yes, Heavengames, so the moderators are indexed by an angelic order depending on the level of their responsibilities (or ass-kicking abilities, as we like to have Groll experiences this).
Get the unofficial Patch v1.4. here!
My best AoW-Sm map: Drums of Death (This is the multiplayer version; for single player, or AI use different version)
Other proud AoW-sm maps: The Key of Kharzul, The Fight for Light, Waikiti Island, Goldrush Mountains
My proud AoW2 maps:The River Arne
Coordinator of the v1.4 and v1.5 patchteams, Seraph of AoWHeaven, PBEM Singles Champion 2008


For Demons:
They are essentially the same, since they are simply fallen angels. Some examples:

First sphere - namely the Seraphim, Cherubim and Thrones.
Seraphim:
* Lucifer or Satan is the leader of the hierarchy of devils
* Azazel (also known as Azrial) was second after Semyazza in leading the grigori, who fathered the Nephilim. And the chief of the nine choirs of angels are fallen.
* Beelzebub is the lord of Dark Places, people say that he was the angel of Germs or Plague.
* Asmodeus is of the same order. He continues as a Seraphim to this day, that is, he burns with the desire to tempt men with his wine of luxuriousness.
* Samael (Some texts have Samael as Satan's true angelic name instead of Lucifer)
* Semyazza was the leader of the fallen Grigori. The Grigori were bound to the earth during the Great Flood as punishment for their fall.

Cherubim:
* Balberith is Prince of the Cherubim. He tempts men to commit homicides, and to be quarrelsome, contentious, and blasphemous.
* Lauviah
* Marou
* Salikotal
* Abaddon

Dafyth, this is a lot of VERY intersting and useful information.

Btw, while there is a news item concerning on this on the AoWII Heaven, ther is no one on the original site, which is the place where our hero works... Sounds odd for me

Thanks everyone... and yes I'm looking forward to being red. I've got some ideas and plans that are being developed so it will be fun to flap these wings around little bit more than what I've been able to do.

posted 01-16-09 01:24 PM EDT (US)     15 / 48
Pssst, thanks Gandalf...
Get the unofficial Patch v1.4. here!
My best AoW-Sm map: Drums of Death (This is the multiplayer version; for single player, or AI use different version)
Other proud AoW-sm maps: The Key of Kharzul, The Fight for Light, Waikiti Island, Goldrush Mountains
My proud AoW2 maps:The River Arne
Coordinator of the v1.4 and v1.5 patchteams, Seraph of AoWHeaven, PBEM Singles Champion 2008

posted 01-16-09 03:59 PM EDT (US)     16 / 48
Congratulations Enginerd! You deserve it for all the great work you've done on the site an in organizing these complex tournaments!
» Age of Wonders 2 Heaven • AoW1 Heaven • City Building Forums • Halo Wars Heaven
» Complaint Heaven

It´s nice to be important, but it´s more important to be nice.

posted 01-16-09 08:33 PM EDT (US)     19 / 48
I'll note that almost all of this information on angels and demons Dafyth posted is contained within the apocrypha and either self-conflicts or is non-intuitive. For example, Michael and Gabriel supposedly hold both the rank of Seraph and of Archangel.

EDIT: Congrats, Enginerd! (How could I forget that!)
-Heir to Beleriand, Heir to the Silmaril, Chosen of Illuvatar-
GM of the Glory of the Past Middle Earth Roleplay Thread
Creator of the New Keepers Campaign

posted 01-16-09 09:27 PM EDT (US)     20 / 48
Congratulations, Enginerd.
I'm looking forward to see those wingflaps you mentioned.
It's like watching a flock of clown-like apes trying to navigate a ship, even though the ship has in fact been stranded on some kind of reef for about 7 years and none of the apes have noticed it yet. -Drahnier on OD moderation.

posted 01-17-09 05:39 AM EDT (US)     22 / 48
Well done Enginerd! This wingation was earned one, great that we have now another active Angel down the original.
I take to use this opportunity to thank Enginerd for all the hard work he has been doing for the community and us members (must have been suffering, but bare with us

) *AEhem* So.. Thank You Enginerd, your example inspires surely all of us to strive and work for better and more active commune!
Now that the day's good work is done, I'll stop pretending to be good person and go to do something less useful..

Beelzebub is the lord of Dark Places, people say that he was the angel of Germs or Plague.

Of course it's apocryphal, by definition. It is called religion (or faith)

Greeks, Romans, Norsemen, Muslims, Hindus, Mayans, Toltecs, First Americans, and Taoists all have their own thing going, and I am fine with that as well. Heavengames choose Judeo-Christian Hierarchy for whatever reason -- I'm just filling in the blanks for those who are curious.

posted 01-17-09 03:14 PM EDT (US)     24 / 48
What Beren means when saying that this is apocryphal is, it's taken from apocrypha, as opposed to judeochristian canon (the Bible). It doesn't need to carry negative connotations

posted 01-17-09 03:51 PM EDT (US)     25 / 48
What Gandalf says is right, Dafyth - most of this information isn't even canonical within Christianity. It's certainly not canonical within Judaism; the nine ranks of angels was something that Thomas Acquinas cooked up in the early Renaissance; Cherubim and Seraphim do appear mentioned as guarding the Ark of the Covenant, but nowhere is it explained what they actually are. Portraying the ranks of angels in a hierarchy like this is also misleading, since a single angel can inhabit multiple levels simultaneously.

-Heir to Beleriand, Heir to the Silmaril, Chosen of Illuvatar-
GM of the Glory of the Past Middle Earth Roleplay Thread
Creator of the New Keepers Campaign

No one has a monopoly (except maybe the Pope

) on The Formal and Material Principles of Theology. What is considered "canon" in fact varies greatly within Judeo-Christianity. That's why there are so many different denominations and sects.

Until God sees fit to put in another personal appearance and set the record straight, we do the best we can with what we have. I am not proselytizing here; people can believe whatever "canon" they choose. But the question was asked about the source of the Heavengames moderator title, and I replied.

If you believe that they chose another source, then feel free to post it.

HALT all th Judeo-Christianity stuffs for a moment!
I am Orthodox Ashkenazi (European descent, etc) Jewish and have several Sefardi(Middle-Eastern, African descent) and Catholic Christian friends, so I'd like to explain my studies of the perception of angels.

Judiasm (All): Angels come in the form of regular travellers, either to tell good news or messages as plain people, or as evil people who intend to stop a great 'Mitzva', or good commandment, deed. They aren't glowing, normally, or with remarkable features. Such appearance gives them away and their motives of action.

Catholic Christianity: Angels are beautiful humanoids, but can and will disguise themselves to stop a possible evil or grant strength and blessings to humans. One of the Seven Deadly Sins throughout all Christianity is 'Pride.' Some state that angels disguise themselves when fixing something in public is not to make humans feel 'worthy' and become pompous and tyrannical.

*Cherubs are actually Paganist, not Christian, along with Halloween. For some reason, both got adopted into Christianity.*

'Seraph' is another name for an 'Archangel' the final semi-deities of Judiasm and Christianity.

Lucifer was an archangel that rebelled against G-d, sending him down, down, down...S-m-el is His name in Judiasm. Actually writing His name in any language is a heavy curse.
Demons are fallen angels specifically, not archangels. Beelzebub is, yes, an adaptation of the Hebrew, 'Ba'al Zevuv', which means 'Lord of the Flies'. He is the demon in charge of disease and decay.

Now, be on your best behavior, please.

Get the unofficial Patch v1.4. here!
My best AoW-Sm map: Drums of Death (This is the multiplayer version; for single player, or AI use different version)
Other proud AoW-sm maps: The Key of Kharzul, The Fight for Light, Waikiti Island, Goldrush Mountains
My proud AoW2 maps:The River Arne
Coordinator of the v1.4 and v1.5 patchteams, Seraph of AoWHeaven, PBEM Singles Champion 2008